Maureen has lived in Shepperton since 2006. She is married to Steve and between them they have six children. Two of her daughters work in care, one living locally is an NHS worker at St Peters Hospital.

Having retired from a career in local government Maureen believed she could put her experience in Housing and Adults & Children’s Social Care into good use within the Community.

She was elected to the Council in May 2015, joined the boroughs cabinet the same year and holds responsibility for Community/Wellbeing & Housing, which includes the boroughs services for older people (including our Greeno Centre), children & young people. Maureen was re-elected in May 2019 and has continued in this role.

Maureen enjoys both supporting and representing residents to resolve matters, they have sought her assistance, whilst taking seriously her responsibilities as a borough Cabinet member having direct influence in shaping the council services.

Over the past 6 years Maureen has been very active locally initially becoming a Governor at Saxon Primary School. Joined and is actively involved in the Management Committee of Shepperton Youth Club. Established the Dementia Friendly Shepperton Group, become a Purple Angel supporting the Spelthorne Dementia Support Group. Has actively worked with Shepperton, Laleham & Charlton Village Residents Associations and held the position of Governor at Ashford and St Peters Hospital for 5 years.

Maureen and her husband Steve have lived in Shepperton for the past 12 years. Having taken early retirement from a career in local government. Maureen believed she could put her experience in Housing and Adult & Children’s Social Care to good use within the community. She was elected to the Council in May 2015, joining the borough’s Cabinet the same year. She holds responsibility for Community Wellbeing which includes the borough’s services for older people and children. Maureen has enjoyed working with local residents, supporting and representing them to resolve matters they have sought her assistance with, as well as her wider council responsibilities.

She is also a governor at Ashford and St Peters Hospital.

Half Term food for children and families 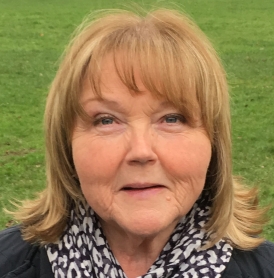