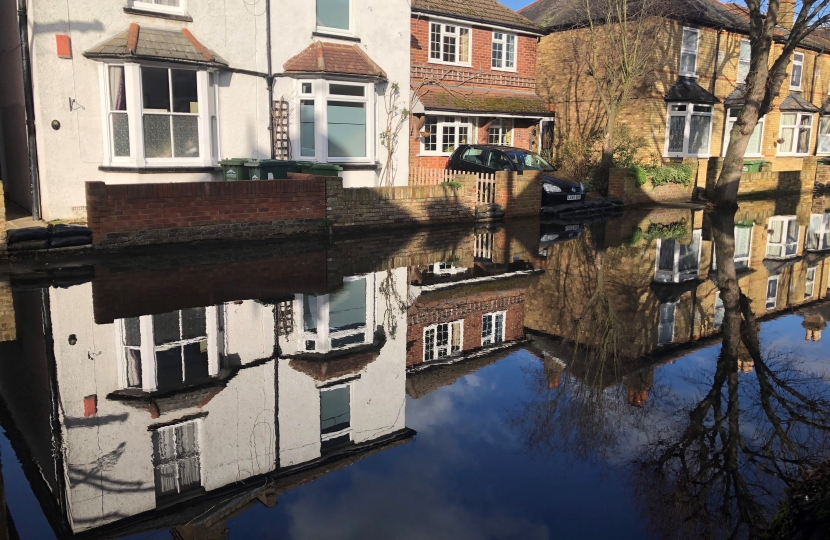 As happened in 2014, Guildford Street filled with flood water when the River Thames began bursting its banks in Staines, putting pressure on local drains and sewage systems.

As river levels began to rise Cllr Mooney alerted the Environment Agency to likely flooding in the area. A few days later when water began pouring up through the drains in Guildford Street she was contacting local authorities to deal with the situation.

Early in February she reported to local people that Guildford Street was closed due to flooding and given residents' concern at the water levels, Highways at Surrey County Council had arranged for a tanker to attend and remove the surface water.

However it took many more calls before the work was carried out, leaving residents in distress and unable to flush toilets for several days.

From 1st February when flood water first began seeping into the road until 8th when a Thames Water tanker arrived to start removing ground water, it was a difficult week for residents. Sinead visited regularly to check on the situation and continued to put pressure on various authorities to act. Struggling to get the right people to take her complaints seriously she said: "Contaminated water has been sitting in the street for the past three days in the midst of a pandemic, and its rising. You have nothing to offer residents, nothing to help. Several residents, Surrey County Council and myself have made numerous calls but haven't even been provided with a timescale for attendance and continually pass us onto other agencies."

Finally on 7th February she was able to report: "I am very pleased to inform everyone that Thames Water are now onsite removing the water on Guildford Street. Thank you for taking this matter into hand. My congratulations to the residents who put up a very strong and professional campaign to get this action in place. Lets see how it goes... hopefully the water will stay at bay."

When the water was finally removed and people were able to use their bathrooms again, a local resident reported: "I honestly don’t think people realised how much water there was in our little road. FIFTEEN tank loads of water!

"After what felt like a million phone calls to and from Thames Water, Spelthorne Borough Council and the Environment Agency we were near breaking point. With water coming up to people’s front doors and covering front gardens it was time to call for sandbags. As agencies failed to supply sandbags for those in need, we had to take to Facebook and ask for help from Khalsa Aid International and Puja Bedi over at Colnbrook Floods. The neighbours in need were extremely grateful for all your help in delivering the sandbags. What you do as a team is incredible. Thank you.

"After being fobbed off by everyone we spoke to, a final plea to Facebook for help was the last straw and WOW what a response we had. Massive thanks to everyone that messaged me with names and numbers of people they thought could help, it was greatly appreciated. Huge thanks has to go to Cllr Sinead Mooney and Jim McIlroy for coming down to our road last night to make sure everyone was ok and for keeping us all informed as to what was going on. With a message to the Councillor we had the first set of tankers out within an hour.

"Thanks to all the lads that come down last night to clear the road and were still here early hours this morning. The roads been cleared, with the drains and gullies all checked."

Sinead recently reassured residents: "Now that the immediate matter is under control I called for an investigation into this incident under section 19 of the Flood and Water Management Act.

"I am pleased to confirm that last week I attended an initial flood feedback meeting and demanded an investigation take place. This was agreed by all present including representatives from Surrey County Council, Thames Water, The Environment Agency and Spelthorne Borough Council.

"The investigation report will be a public statement of the circumstances of the flood and what parties have a role in managing future risks and will list recommended actions. I have asked that Guildford Street residents are active participants in the investigation and this has been agreed."

Sinead has asked for Guildford Street to agree two or three nominated resident representatives that she can submit to the lead officer. Anyone with concerns around flooding in Staines can email Cllr Mooney on sinead.mooney@surreycc/gov.uk. 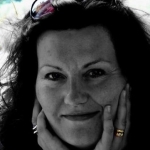 RISING TO THE CHALLENGE!As a community we have faced one of our biggest local crises in years with the flooding of the Thames in January and February this year.  The waters are still receding and sadly many local residents are either currently homeless or suffering great hardship.

The Commonwealth, G7 and NATO Summits