Mary Madams has served two full terms as Borough Councillor for the Laleham and Shepperton Green ward of Spelthorne.  She has lived in Laleham for virtually all her life and has also served the community as a voluntary member of the Charity, The Laleham Society, more recently The Laleham Residents Association.  She has been elected chair of the LRA for over 20 years.

Mary has always worked hard to support the residents of her ward and Spelthorne in general, with great involvement in charity fund raising for the benefit of the community and local and national charities.  She has been the lead on the planning and organisation of the annual village fair, raised money to pay for the summer hanging baskets, organised profitable Jazz Nights and Race Nights and was the instigator of the annual Christmas 'meet your neighbour's' lunch party, a free event for neighbours, family and friends to socialise and enjoy the Christmas spirit.

She has used her funds to support projects at the Laleham Recreation Ground and paid for the Christmas lights on the tree near to Best One in Laleham.

On behalf of residents she has actively opposed the proposed new Eco Park plans, has actively sought the views of residents with regards to any Laleham Park development and set up a public meeting to discuss views. Consequently there are currently no plans to further develop the park.

Mary has been married for over 20 years to Peter until his sad passing at the end of 2014, also leaving a lovely daughter and grand-daughter. She works in the NHS as a Recruitment Manager and is fully committed to providing a continuing, supportive and engaging service to the community.

Mary was re-elected a Conservative Councillor for the  Laleham and Shepperton Green Ward in the 2 May 2019 local election. 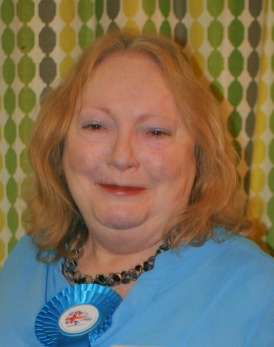